Each year the Youth Advisory Council selects a child to be the TCW™ Honorary Grand Marshal for the upcoming race and training season. The child who earns this honor is one who has met challenges at a young age and overcome adversity. A portion of our Summer Challenge fundraising dollars is donated to the foundation of the Grand Marshal's choice.

Kate poses with her sisters at the pool.
TCW™ is thrilled to announce that Kate Boudreaux of Kentucky has agreed to serve as the 2016 Honorary Grand Marshal for our upcoming race season and Summer Fitness Challenge. Her upbeat outlook and determined personality mesh so well with the cornerstones of our mission and our sport that it seemed natural that she take the helm this year.

Kate is a freshman in high school, just turning 16 years old.  Kate was born with Down syndrome, a genetic makeup where she has an extra 21st chromosome.  Down syndrome affects the way the brain processes information, often slowing the learning process and skills like running and jumping.  Though this creates challenges, Kate hasn’t let it stop her. Kate loves the performing arts, taking part in school plays, dance team, and piano.  She enjoys playing golf, and staying fit with her two older sisters Kala and Kelsey.  Kate is currently working as an assistant dance instructor, and is an honorary team member on the Asbury University women’s golf team. Her goal is to complete high school and enroll in college where she wants to join a sorority.

Kate’s message (and TCW's message, too!) is to focus on what you can do and not on what you can’t do.  She takes on each day with a smile and positive attitude, and she wants you to do the same.  She expects everyone to get up each day with a smile and a great attitude as life is wonderful and should be enjoyed to the fullest.  She feels you are a winner because you have challenged yourself to the race, not because of where you finish.  Life is a race, not to be won, but to be finished to the best of your ability.

Part of the money raised through this year's races and the pledges earned by TCW™ citizen triathletes will go to Kate's favorite organization, her family’s foundation, Prism Project, where she is a self-advocate. You can visit them at www.prismproject.org. Their mission is to promote educational opportunities for those with intellectual disabilities and learning differences through financial grants and scholarships.  They believe all people, including those with intellectual disabilities and learning differences, achieve greater heights when given an educational opportunity.  It is their desire to see that everyone is given an opportunity to learn so he/she can realize the joy of achieving their dreams.

Logan at the 2012 JAM - Juvenile Arthritis March.
Logan Dicus of Minnesota held the title of Honorary Grand Marshal for the 2014 race season.  He and his family chose the Children’s Hospitals and Clinics of MN as one of the beneficiaries of our 2014 fundraising efforts.  Logan was diagnosed with juvenile rheumatoid arthritis (JRA) when he was 5. At the time, his flare ups would sometimes last a couple of weeks to a couple of months.  Logan enjoys swimming, hunting, fishing, playing basketball and baseball – he sometimes has to ice his knee after he’s done playing, but he is not letting that stop him!  Because of the efforts of dedicated TCW Summer Challenge Athletes and their families, in 2014 TCW donated $1500 to Children's Hospital and Clinics of Minnesota, in honor of Logan.

Caeden, post-chemo and thriving!
Caeden Thomas Stoll of New Jersey was diagnosed with a hepatoblastoma in mid October 2011 at the age of 17 months.  Caeden had a partial resection of the left lobe of his liver on November 1st 2011. The surgery was an outstanding success.  Margins came back clean and there was no evidence of metastasis (spreading).  Caeden is now lives life with intense love, curiosity and let us not forget…HUMOR!  Caeden served as Honorary Grand Marshal, and along with his family raised $3000 for TCW toward support of cancer patients and their families. In honor of Caeden, TCW donated $1500 to the Children's Hospital of Philadelphia and another $1500 to Ocean of Love, a support organization that helps families who have children with cancer. 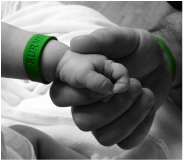 In 2011 Maci Ryker McCarrens of Mississippi was born by emergency c-section. During delivery she lost almost half her blood. Her parents and doctors soon realized Maci suffered from intrinsic renal failure, meaning her kidneys never started working. She spent approximately the first six months of her life being cared for at Le Bonheur Children's Hospital in Memphis, TN where her parents learned how to keep her alive on home dialysis equipment.  With the help of the medical professionals at Le Bonheur and the dogged determination of the McCarrens family, Maci is a survivor. Her father's kidney is a match, and Maci's family is waiting for her to be big and strong enough to receive the adult organ. In 2012 TCW™ chose Maci as the Honorary Grand Marshal. Maci's family chose Le Bonheur Children's Hospital as one of the beneficiaries of TCW's fundraising efforts. Participants in the 2012 Summer Challenge raised enough money to send a check for $1000 to Le Bonheur's pediatric nephrology research unit, in honor of Maci and the battle she is still fighting today.